Thembi Ubisi and Malcom Wentzel have given  South Africans a glimpse into their lives and relationship through videos shared via TikTok.

The videos have received thousands of views and shares across social media platforms, but not everyone is a fan.

In one of the videos, Thembi, a domestic worker,  wears her employer’s jacket after he asked if she wasn’t feeling cold. She told him, “today it’s f*** cold, I want this one. It’s very nice.” Malcom laughs and responds, “leave my lekker jacket alone, ya, that one is nice, it’s antifreeze.”

Some have accused Wentzel of exploiting Thembi.

These videos feel exploitative. Thembi is being used as Malcom’s pawn to feed his white savior complex. It’s almost his way of reinforcing his wealth while making her seem like spoiled and almost greedy – like she’s taking from him. It’s very madam and eve-esque. https://twitter.com/tumimmakgabo/status/1273998017616588800 …

Thembi has been eyeing that jacket . She went straight for it 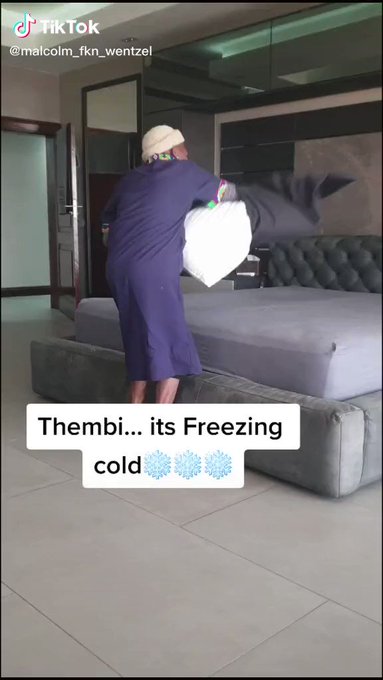 19 people are talking about this

1,132 people are talking about this

These Thembi videos are leaving a sour taste in my mouth. I really don’t enjoy them. The (reinforced) power dynamics, the tone… it’s just off. Or is it just me?

557 people are talking about this

Some of SA’s most famous and influential people including Mmusi Maimane have called on brands and companies to give the domestic employee endorsement deals, saying her sense of humour and bubbly personality could make her a lot of money.

Others suggested that the two start a YouTube web series where they would document their days, or have Thembi review domestic cleaning products.

I think we can all agree that #Thembi is one of the most fun, authentic and humble South Africans. @Unilever and @PhilipsCare here is your next influencer. 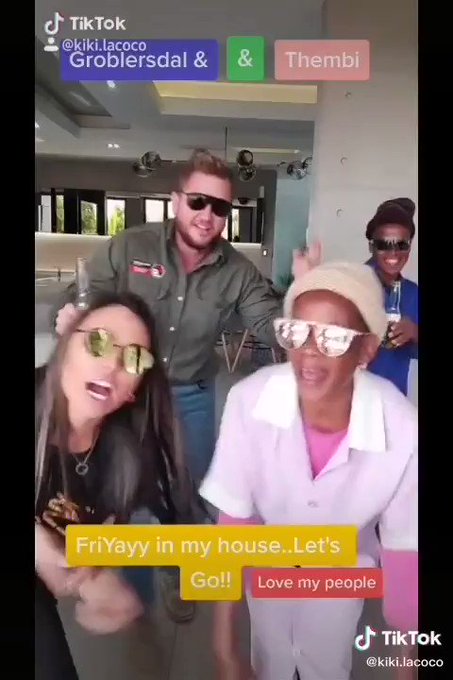 633 people are talking about this

I am sure there are some brands that could use Thembi as an influencer.

The streets love her energy and personality. Based on her current job – she could niche and do MAC washing powder ,Mr Min etc . The kitchen has lots of products and appliances.

1,065 people are talking about this

Thembi and Malcom’s videos reflects a new dawn on South Africa. Call me naive not every white person is a racist.

Thembi gets expensive champagne and gets dropped off in an R8 yet woke twitter can’t even share the same type of food with their helpers. Thembi loves her work environment! Love to see it https://twitter.com/sharx515/status/1274242454825336834 …

Sis Thembi and her boss 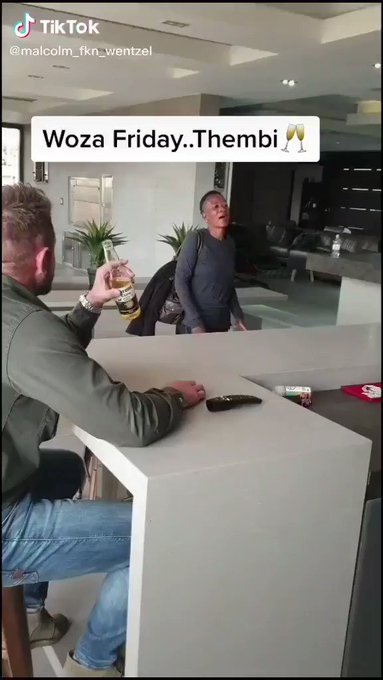 2,795 people are talking about this

On Sunday, News24 reported that Thembi has been Wentzel’s employee for nine years. She said she had been unaware that he was filming for TikTok, but said the love shown to her on social media makes her happy. She told the publication that she has been flooded with calls from people in her area.

Wentzel, who works as a consultant in the mining sector, said he does not consider Thembi as just someone who works for him, saying “we work together”.

Wentzel has been accused of exploiting Thembi to gain social media fame, and of “feeding his white saviour ego”.

Wentzel has noted the comments about race.

In his latest video, he said, “thanks for making us trend on Twitter, just a special thanks for the people that bring in race in the most positive thing we are doing here.” He then turns to Thembi and says, “come, let’s bring them [race]. Thembi can be seen getting packets of rice [pronounced rys in Afrikaans] from the grocery cupboard.

World admin - June 22, 2020
0
Thembi Ubisi and Malcom Wentzel have given  South Africans a glimpse into their lives and relationship through videos shared via TikTok. The videos have received...

Lifestyle admin - July 13, 2020
0
Will Smith isn’t known for foul language, but had no problem dropping the f-bomb on 50 Cent after the rapper took shots at his...

World admin - July 11, 2020
0
Sea rescuers have already responded to three emergency incidents along the Western Cape coastline as the first of three cold fronts made landfall in...

Sport admin - June 22, 2020
0
Bidvest Wits allegedly turned down a request from Wits University that would have prevented the 99-year-old tradition-steeped football club from being renamed and relocated...

Business admin - July 15, 2020
0
The year 2020 has been tough for businesses that trade across borders. Supply chains were disrupted when many countries closed their borders to all...

Coronavirus spreads in Ukrainian football as another game postponed

Sport admin - June 22, 2020
0
The Ukrainian Premier League has postponed a fourth match due to coronavirus after another two players tested positive. Two players from Olympic Donetsk were found...
Ad